What could be better on a hot summer’s day than a long walk in the countryside with your dog? But, with the topsy-turvy weather we get in Britain, it’s sometimes easy to forget that both dogs and their owners need to stay hydrated. We’ve already had several days in the past few months when the temperature’s been above 30C. That means a lot of sweating... and a lot of panting.

So, I thought it might be an idea to look at how to spot signs of dehydration while out walking – and, more importantly, how to avoid it in the first place. This blog focuses on humans; next time, we’ll look at dogs.

The first sign that you’re dehydrated is, of course, thirstiness. You might also notice you’re passing less urine and, when you do, it’s darker than normal. Beyond that, you’ll start feeling tired, dizzy and irritable. Headache is common and you may have joint pains too.

So, how do you avoid dehydration? If you’re planning a long dog walk on a hot day, you need to take water with you, or at least plan a route that allows you to get refreshments along the way. If I’m planning to be out on the hills all day, I take two litres of water in a ‘bladder’. This slips into a pouch at the back of my daysack and I drink through a hose with a bite valve on the end of it. It’s handy because it means I drink whenever I feel thirsty – and not just when I can be bothered to take my pack off and get a bottle out. 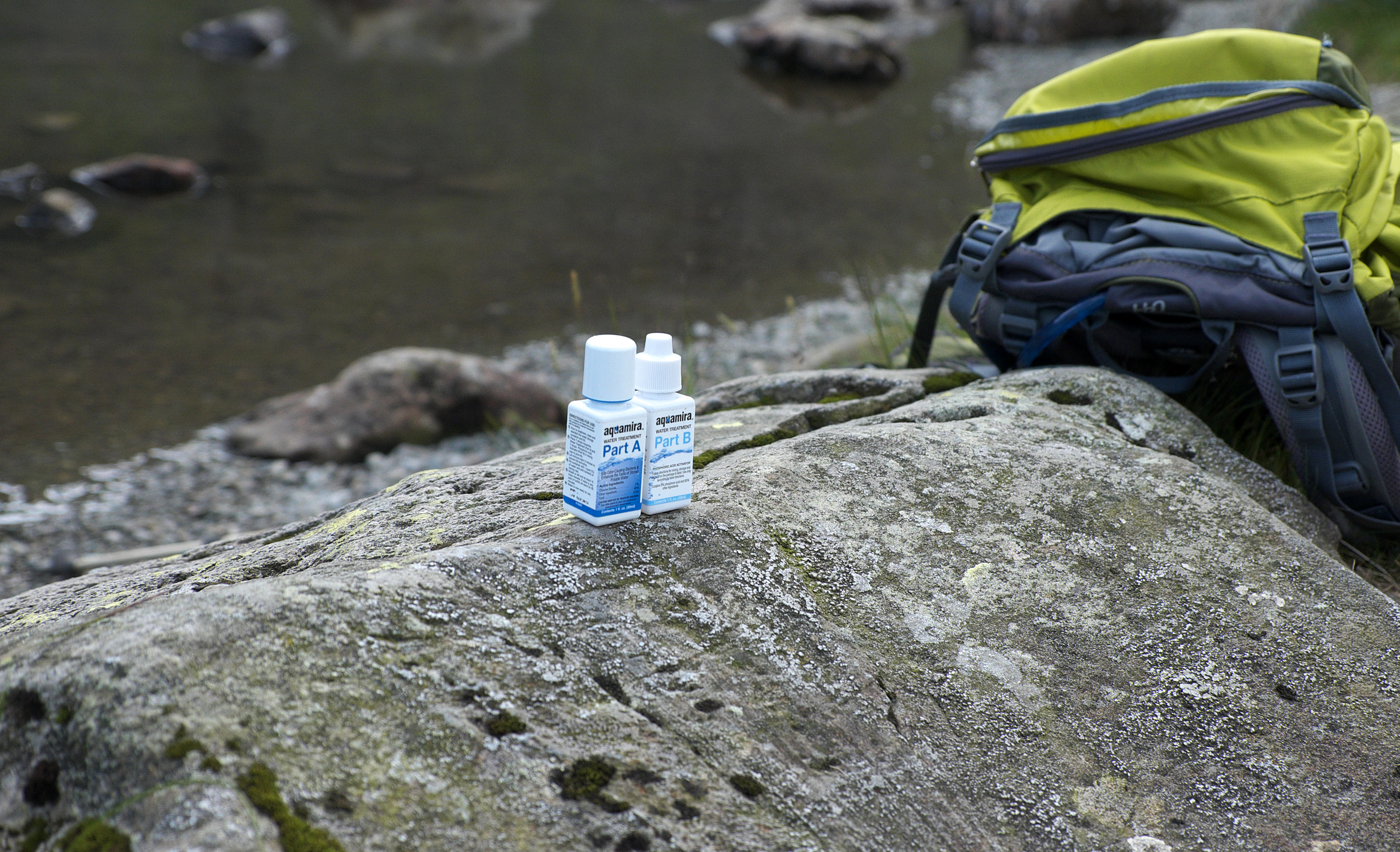 I don’t tend to carry more than two litres because of the weight – each litre weighs one kilogramme (or 2.2lbs). If I’m planning a really long walk on a really hot day, then I take water purification with me and top up from streams. I know plenty of people who regularly drink direct from streams in the British hills – above human habitation – and never get sick. I used to do it myself, but I stopped after finding a dead sheep lying in a stream I’d just drunk from. I didn’t get ill, but finding the rotting carcass put me off untreated water forever. I now carry chlorine dioxide-based water treatment droplets that’ll kill off bacteria such as Campylobacter and Salmonella, and parasites such as Giardia. (Giardia’s the bug that comedian David Walliams picked up a few years ago after swallowing too much of the Thames on his 140-mile swim down the river for Sport Relief.)

There are other ways of treating water too. Boiling is probably the safest option, but more convenient methods include carbon filters, handheld UV purifiers and various other chemical options. Too many, in fact, to go into in any detail here... 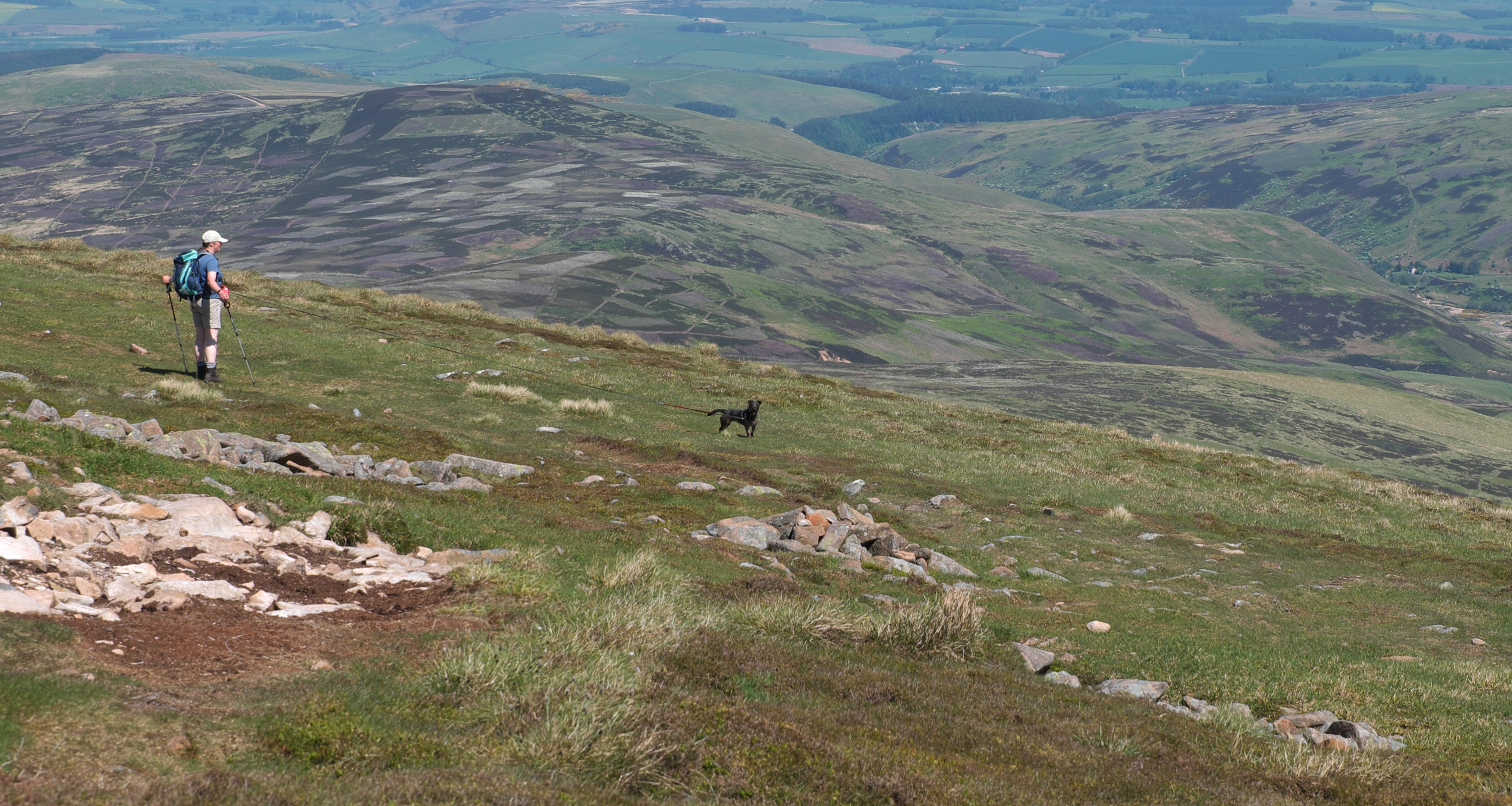 ‘Come on! Let’s go this way! I’ve still got lots of energy left’

To complicate matters, if your dog’s forced you to walk for miles and miles across tough, hilly terrain and you’re sweating buckets, you’ll start losing the electrolytes (body salts and minerals) that your organs, particularly your brain, need to function properly. This can happen even if you’re drinking enough; in fact, drinking too much water without replenishing these salts can be dangerous. Poor levels of sodium in the blood result in something called hyponatraemia. Symptoms include nausea, headaches, cramp, confusion and slurred speech. If left untreated, hyponatraemia can be fatal, but things are unlikely to get that bad if you’re just out for a walk. (Attempting an Ironman-style triathlon in 35C heat would be another matter though...)

To avoid depleted sodium levels, take along some salty snacks on your walk – salted peanuts, for example, or crisps. Most pharmacists sell rehydration sachets containing salts and glucose which, when dissolved in water, will help bring your system back into balance. If you regularly walk long distances, you could slip one of these into your first aid kit. Be aware though that many of these products contain artificial sweeteners such as aspartame – and the jury’s still out on what they can do to your body long term.

One other important point to take into consideration... While you’re out walking, drinking alcohol to quench your thirst isn’t going to help; it’ll just make you pee more, causing you to lose more fluid than normal. The same is true of large amounts of caffeine or energy drinks with caffeine or other stimulants in them.

Next time, we’ll look at how to make sure your dog gets enough water, the symptoms to watch out for and what you should if he or she does become dehydrated.